One of my goals for 2017 is to read through the entire Bible from cover to cover (again). As with any New Year’s resolution, January 1 feels great, right?  “In the beginning..,” creation, and all of that beauty.  Most of Genesis is rather exciting and I have been prayerfully asking the Lord to reveal new truths as I dive into familiar stories.  But in all honesty, somewhere around January 26, which is entitled “Civil and Ceremonial Laws,”  somewhere after the crossing of the Red Sea and the 10 Commandments, somewhere around Exodus 21, I am struggling.  It feels like there are endless chapters on what sacrifice is appropriate for what sin, where the blood goes after the offering is killed (gross), and what bodily fluids make you unclean and for how long (even grosser).  In this chunk of scripture we find the plans for the tabernacle and the priestly garments.  We find each and every teeny tiny little law for life in relationship with God and others at the time, and I am sure that the Israelites found it immensely helpful.  And because I believe that, “All Scripture is God-breathed and is useful for teaching, rebuking, correction and training in righteousness (2 Timothy 3:16),” I forge ahead.  (And I am reminded how thankful I am to be living on this side of the cross)!!!  But, at 6am, Leviticus, you are a struggle.

Let me catch you up a bit in case you haven’t been trudging through the wilderness with Moses and me lately.  God has called Moses to be the unlikely leader of the Israelite people following centuries of slavery in Egypt.  After 10 insane plagues, Pharaoh does in fact “let the people go.”  So they start off on what should be an eleven day journey to the Promised Land of Canaan, the land “flowing with milk and honey.”

In Exodus 13:1-2 we read, “The Lord said to Moses, ‘Send some men to explore the land of Canaan, which I am giving to the Israelites. From each ancestral tribe send one of its leaders”   So begins the story of the 12 scouts or spies sent to explore the Promised Land, what they found, what they said about it, and the consequences it held for a nation.  It is breathtakingly convicting to me… And it’s got me asking, “What’s my scouting report?” 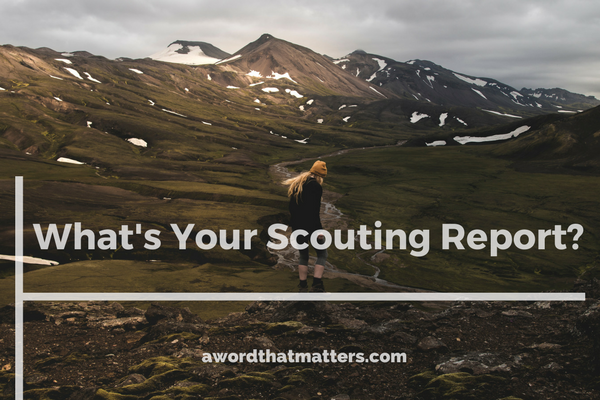 The command from God in 13: 1-2 is simply to explore the land.  He is basically saying, “Go take a look at what I have already given you, go give it a sneak peak and come back to tell everyone how awesome it is!  Let’s have a pep rally!  You get to be the cheerleaders!”  God does not say, “Go see if we can do it.  Go check it out and see if it’s going to work.  Go form a strategy on how we may be able to take them.”  Nope.  Just “go explore the land of Canaan, which I am giving to the Israelites.”

But in the cosmic game of telephone that we humans unfortunately play with our Heavenly Father sometimes, the command begins to get a bit twisted.  In Numbers 13: 17-20 Moses sends the scouts off with these words, “See what the land is like and whether the people who live there are strong or weak, few or many.  What kind of land do they live in?  Is it good or bad?  What kind of towns do they live in?  Are they unwalled or fortified?  How is the soil?  Is it fertile or poor?  Are there trees in it or not?  Do your best to bring back some of the fruit of the land.”  To be fair to Moses, he is still just asking for the scouting report but it feels like he is beginning to plant some doubt in the minds of the spies. A bit of negativity.  “Is it going to be hard?  Is it going to be good?  Is it going to be worth it?”

My question is this: if it is what God has for you, what He has already given you by His word, His plan for your life, then does it matter?  Does it matter if the people are strong and many, living in fortified cities with poor soil and no trees? Worst case scenario doesn’t change the reality. If this is the land God is leading you into, then this is the land you are heading to.  It reminds me of another conversation Moses had with the Lord earlier in Exodus 33:14 where he says, “If your Presence does not go with us, do not send us up from here.”  This is it, Moses.  This is where His presence is going.  He has already given it to you.  Good, bad, or ugly.

I don’t mean to be hard on Moses here.  I get it.  When God sent my little family to this desert town I was asking some of the same questions.  The answers?  No trees, no water, poor soil, few restaurants, no good shopping, further away from all you know.  Great. The first time my husband and I came here for a bit of scouting of our own, I cried my eyes out.  As tumbleweeds hit our car and the constant wind whipped sand all around, I felt myself questioning this land that God had obviously sent us to.  Let me just say that I wasn’t feeling much like a cheerleader at the time.

Back to those Israelites… The 12 spies came back with a cluster of grapes so large it had to be carried on a pole!  At first glance this had to be good news, right?  But then the scouting report comes: “We went into the land to which you sent us, and it does flow with milk and honey!  Here is its fruit.  But the people who live there are powerful, and the cities are fortified and very large.  We saw descendants of Anak there [giants] (Num.13:27-28).   We can’t attack those people, they are stronger than we are. The land we explored devours those living in it.  All the people we saw there are of great size.  We seemed like grasshoppers in our own eyes, and we looked the same to them (Num. 13: 31-33)…” said the 10.

BUT, my boys Joshua and Caleb had a different scouting report.  “We should go up and take possession of the land for we can certainly do it (Num. 13:30)”. “The land we passed through and explored is exceedingly good.  If the Lord is pleased with us, He will lead us into that land, a land flowing with milk and honey, and will give it to us.  Only do not rebel against the Lord.  And do not be afraid of the people of the land, because we will devour them.  Their protection is gone, but the Lord is with us.  Do not be afraid of them (Num. 14:7-9)”. Same land.  Same obstacles.  Same challenges.  Different scouting report.

Why?  Why did the 10 see a land that would devour them, while the 2 declared they would be the ones to devour?  Why did the 10 see giants and the 2 see people without protection?  How could the 10, huge fruit of the land in hand, preach fear while the 2 advocated courage?  It was all in where they were looking.  So simple.  So profound.  So life-altering.

Where are you looking today?  Your circumstances or your Creator?  At all that is trying to devour your peace and joy, or at the Prince of Peace?  Are your human eyes so focused on what you can see that you can’t hear the promises God has spoken to your Spirit?  What are you trusting in?  Your experiences or your faithful Father?  Have you forgotten the Red Sea crossings of yesterday as you look at the giants of today?  What are you saying about your life, your marriage, your kids, your finances, your church, your country, your struggles, your opportunities?  The scouts came bearing the same good fruit, the same possibilities… It was in their words, what they confessed with their mouths that was different.  What are you speaking over your life?

Numbers 14:36-38 says, “So the men Moses had sent to explore the land, who returned and made the whole community grumble against him by spreading a bad report about it— these men who were responsible for spreading the bad report about the land were struck down and died of a plague before the Lord.  Of the men who went to explore the land only Joshua son of Nun and Caleb son of Jephunneh survived.”  Ummm, whoa!!!

Not only that, because of the faithless scouting report of these spies and the nation’s rebellion in light of them, the 11 day trip to Canaan turned into a 40 year wandering in the desert.  God said in Numbers 14: 33-34, “Your children will be shepherds here for forty years, suffering for your unfaithfulness, until the last of your bodies lie in the wilderness.  For forty years-one year for each of the forty days you explored the land- you will suffer for your sins and know what it is like to have me against you.”  Yeah, I’d say it matters.

I don’t think anyone will be struck down by a plague today or die in the wilderness but maybe your calling will, a relationship might, a testimony could.  I do think our faithless words steal blessings not only  from us but from the next generation as well.  I believe my scouting report now could either usher my children into places God wants to take them in the future, or keep them out for years.  Am I setting them up to be devoured or do the devouring?  Defeat or victory?  The decision to either focus on God’s promises or on the world’s problems matters.  I could still be one of God’s chosen people wasting my whole life in the desert of disbelief and fear.  No thanks.

So are you a 10 or a 2?  Do you see the giants or the fruit?  What’s your scouting report?  It’s a much shorter trip to the promise land when it lines up with His promises!  Let us be Joshua and Caleb’s in a questioning culture.

Well, this town still doesn’t have any water or trees.  The restaurants and shopping still leave a lot to be desired.  I wouldn’t say that it is “flowing with milk and honey,” although I do spy the grapevine starting to come back in the garden.  They won’t be huge but they will be sweet.   Last night, as I sat on my “sunset porch” with a good book, watching the West Texas sky do it’s thing while my children and chickens free-ranged, it felt pretty close to a Promise Land to me.  If there is ever a time when you hear my scouting report not line up with the promises of God, I give you permission to throw a tumbleweed at me.