I think I have spent much of my life feeling like too much and not enough all at the same.  Only a woman could find herself there!  My grandmother, my precious Nannie, was famous for saying, “Everything in moderation.”  Maybe there were a generation of grandmothers who were famous for saying that very thing.  It imprinted on my heart at an early age and I have spent the last 4 decades trying to find the elusive moderation she held in such high regard… That perfect balance of high and low, work and rest, too much and not enough.

I have gone through seasons of feeling a lot of shame over my “too much and not enough-ness.”  I have listened to the lies that told me I had to hide it, overcome it, pretend it away.  And if none of that worked, well I should just isolate myself, not let myself be known, shut my mouth because “everything in moderation” you know.

And then God blessed me with a circle of fierce friends to walk this road of womanhood, faith, motherhood, and marriage with.  And do you know what I realized when I got in there deep with them?  They are all too much and not enough too!  Just in different ways… I have friends who are really into eating well and health, very involved in social justice, extremely focused on education for their children, exceptionally tuned in to intimacy with their husbands, particularly concerned with finances.  And I know that their “too much-ness” leaves gaps of  “not enough-ness” in their lives too. 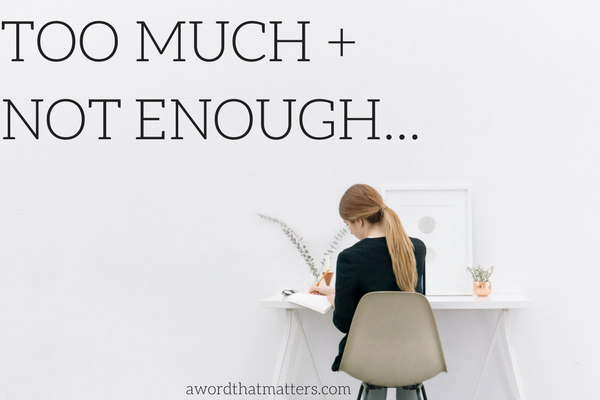 In my hiding and pretending years I might have judged their too much and not enough.  I may have defended my too much by focusing on their not enough all the while wishing desperately I had a sliver of it.  And then a beautiful thing happened… On my 40th birthday, my darling friends went around and told me the thing that they loved and respected the most about me.  And every single one mentioned some part of my “too much.”  They respect how disciplined I am in my time in the Word, how hard I work to make my home a place where others feel welcomed, how driven I am to find and fulfill God’s calling on my life.  My too much inspired and encouraged their not enough-ness just as their’s does mine.

It’s not rocket science.  It is the body of Christ.

The foot needs the hand.  The eye needs the ear.  My structured, disciplined, driven self needs my friend’s spontaneity and light heartedness, and (sometimes a romance guru.). And I trust they need my too much too.

But we also know that our God is a God of abundance, not moderation.

He is abundant in grace, and love, and in giving good gifts to His children.  And maybe, it is there in our too much that we find our gifts and His unique calling on our life.  Maybe when we press in and refine our too much, rather than try to hide it, we find that it is, in fact, just right.  When we let Him be enough in our not enough-ness we are then exactly enough.

Oh how I pray you have a circle who love you enough to tell you that they need your too much for their not enough.  How I pray that you find the courage to come out of hiding to tell a friend on this journey that her too much inspires and encourages you in your not enough-ness.  And when it is our turn, let’s tell our daughters and granddaughters of God’s abundance.  To be “too much” is in His character and He is all for their, for our, for your abundance.  Only in Him are any of us enough.