I have a confession to make.

I didn’t plant a garden this year.  I wanted to so badly but life has a way of forging it’s own will.  Spring was filled with so many activities, and the tiller was broken, and the chickens needed a new coop, and every weekend rushed past, leaving us breathlessly holding never finished to-do’s.

I had to let something go.

But the hard part of letting something dear go is that you have to do it over and over and over again.  I let the dream of a garden go during planting season, and I have let the reality of it go every summer day that I have walked by the overgrown, unplanted plot of earth.  No fresh okra to fry.  No oversized zucchini to surprise me.  No joy-filled gardening mornings.  No harvest.  No life.

I have another confession to make.

My hope has felt a little like that as well.  Not in everything, certainly.  The summer has been full and sweet.  But when I have gotten good and still, I have realized there is hopelessness in some areas of my life.  It’s a tricky thing to name because it doesn’t knock loudly on your heart making itself known easily.  It hides behind bigger, boisterous feelings.  Frustration.  Anger.  Jealously.  Fear.  But when I peer beyond, look closely within, I find the root of hopelessness.

It whispers subtle thoughts in my head:

“Don’t work so hard on this project.  It doesn’t matter.”

“Voicing that dream will make you look stupid eventually.  Forget it.”

“This situation is never going to improve.  Just make peace with defeat.”

“Connecting/reconciling with others is too much work, and too much risk.  It’s not worth it.”

So I unknowingly let go of hope in those dead, unfruitful places.  And I let it go again and again as I continued to make agreements with that sneaky hopelessness.

Now, back to the garden… only not the garden.  Back to the wild patch of ground right on the other side of the house.  This forgotten spot comes up with the best surprises in summer- wildflowers grow tall, reaping the benefits of the yard’s sprinklers while protected from the go-kart racing.  My husband’s tractor and I fight constantly- me standing guard for my daisy, sun-flower friends, him telling me there are sure to be snakes in the tall grass.  I know he is right but the momentary, wild beauty is worth the fear.

And this year, there is an accidental pumpkin. 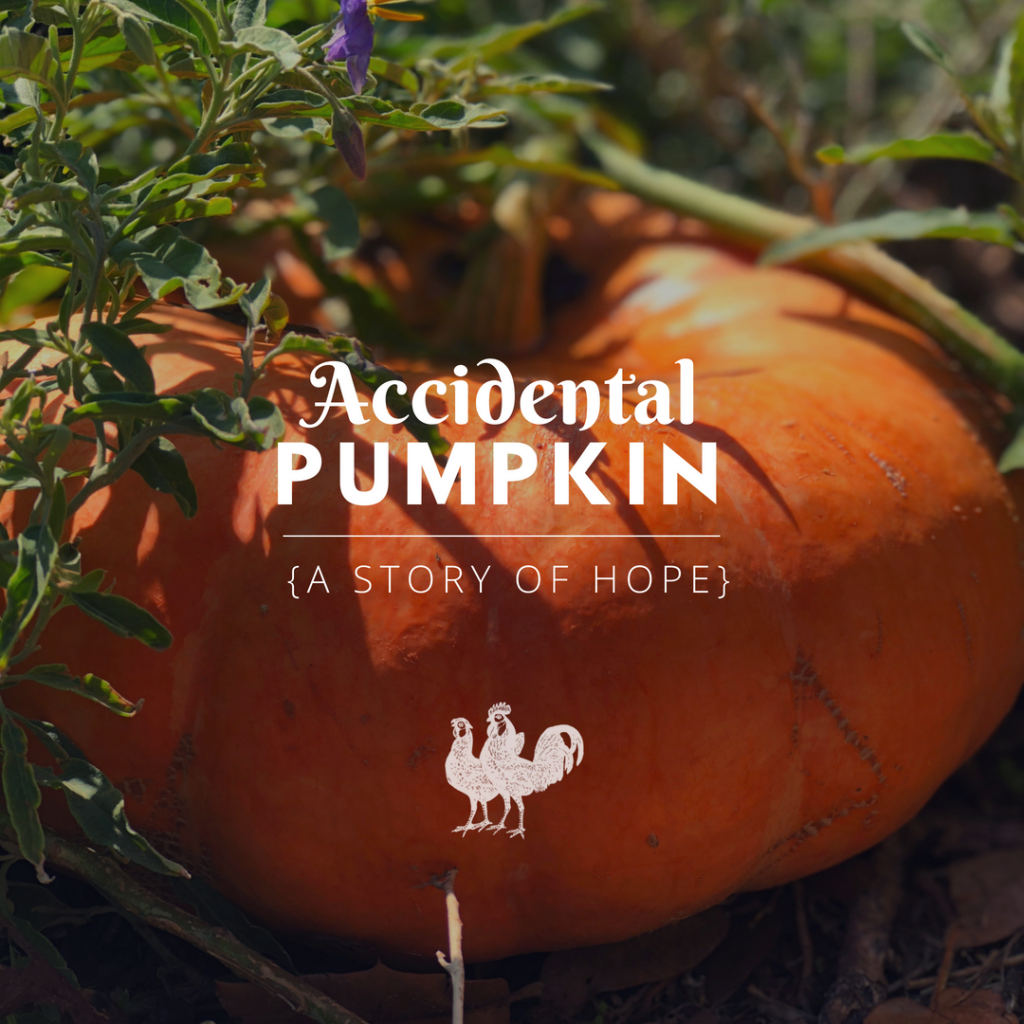 I spotted the large leaves vining their way through the flowers in the earliest summer days.  I have watched the yellow blooms open and close with promise.  And now, there is a pumpkin there growing bigger by the day.  Not just your run of the mill, jack-o-lantern kind either….  one of those peachy, orange fancy Cinderella ones that cost $20 at the grocery store in October. An accidental pumpkin in the middle of the wildflower patch… 200 feet from the unplanted, desolate garden.

In the letting go, I had forgotten an afternoon in late November when the Fall decor was being replaced with Christmas lights, and nativities.  The children were tasked with gathering pumpkins from the porches and hearth but rather than trashing them, I let them smash them instead.  They had a grand time taking baseball bats, and golf clubs, big sticks and boots to every size, shape, and shade of pumpkin over in that forgotten spot.  I remember a fleeting prayer about all those seeds flying, finding their way into the cold ground.  But this is west Texas, after all, and tumbleweeds are the only things that grow without effort.

But sometimes God is just incredibly sweet, and surprises us with something we hadn’t even dared to hope for.  Sometimes, in the fog of discouragement and disappointment, he delivers a gift out of nowhere.  We may be focused on an area that is not producing the life and fruit we had imagined, when we see the supernatural fruit of the unexpected in a patch of wildflowers.

The garden may still be overgrown.  The dream still may lay dormant for a season.  But I bet if we all look closely enough, we may find an accidental pumpkin… the produce of a forgotten day, a forgotten conversation, a forgotten investment, a forgotten seed.

And so we put the focus there.  We hang our hope where there is growth.  We focus on the places sprouting life, instead of walking around the same ‘ole dusty, dried up space.  Let go of the particulars.  Let go of the results.  It will usually look different than we thought.  But hope is dredged up with gratefulness, with a focus shift, with eyes to see where life is happening, with a daily fight for joy.

So no, that prayer was not answered the way I had wanted it to be.  There still isn’t clear victory in this fight that has torn at my heart for years.  The changing of the season is coming at me with disappointments already.  And that project that I sowed deeply into may not ultimately matter.  But there is life and blessings somewhere else, I’m sure of it.  I may have to look to the forgotten spaces, beneath the tall grass of my expectations, and mow down hopelessness to get a better view.

And no, there hasn’t been any okra to fry this summer.  There have been no zucchini dishes to thrill my children with (insert sarcasm).  The summer harvest has not been what I dreamed it would be.  But hope is growing peachy orange among the wildflowers.  And I’ll have an accidental pumpkin for the fall.

“This is what the kingdom of God is like.  A man scatters seed on the ground.  Night and day, whether he sleeps or gets up, the seed spouts and grows, though he does not know how. All by itself the soil produces grain.”  Mark 4:26-28